Clive Medlam to walk the plank

Another Not The Barnet Times Exclusive!
Word reaches us that Mr Clive Medlam, Barnet’s Chief Financial Officer, is leaving the council for pastures new. Unfortunately, at the time of publication, there was nobody in Barnet’s press office available to confirm or deny the story. Update: This has now been confirmed.

This news will come as quite a surprise to many, as he only recently had his new photograph uploaded to the council’s web site.

As regular readers will know, Don’t Call Me Dave has previously called for Mr Medlam to get the chop. He is the officer who escaped with nothing more than a mild warning when it was discovered that he had buried £60,000 of legal indemnity expenses in a report to the Cabinet Resources Committee in 2005.

It was the same Clive Medlam who signed off several reports in 2006 authorising the council to borrow a massive £70 million. Some of this money was intended for the schools rebuilding programme, but the money was not immediately needed and we now know that £27.4 million was deposited in Icelandic banks, contrary to the council’s own investment policy. Not that Mike Freer knew anything about it. No siree!

As recently as May, we reported how Mr Medlam spent £31,000 of taxpayers' money on a room booking system which could have been purchased for £1,000. At the time we asked: “How much more of this do we have to put up with before he is shown the door?” Not much, it seems. 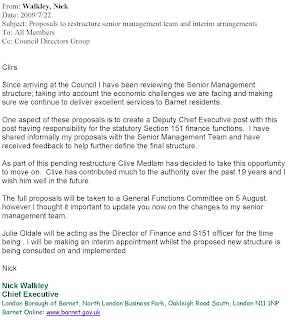 Chief Executive Nick Walkley has announced Mr Medlam’s departure (see left) as being part of a restructuring. The only problem is, Mr Medlam is Barnet’s Section 151 Officer, so called because the council is legally required under s.151 Local Government Act 1972 to have such an officer.

The Section 151 officer has a number of statutory duties, including the duty to report any unlawful financial activity involving the council (past, present or proposed) or any failure to set or keep to a balanced budget.

Clearly, the council cannot make the Section 151 officer redundant, so it rather suggests that Mr Medlam has been given the order of the boot, and possibly with a very large cheque.

Don’t Call Me Dave won’t shed too many tears over his departure, but with his number two, Jonathan Bunt, away from the council on “extended leave”, it does rather beg the question as to whether there is anyone at all left in charge of our money?

was anyone in charge before?