Since his last retirement, Don’t Call Me Dave has been tempted to rant on numerous occasions, but has always managed to bite his tongue. However, a red line has been crossed with the scandalous news that ‘party packs’ and T-shirts have been openly sold at the TUC conference to ‘celebrate’ the future demise of Baroness Thatcher. 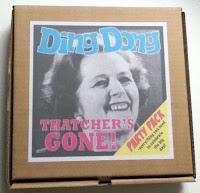 It is hard to find words to adequately describe the low life scum who think that the death of a democratically elected Prime Minister is something to rejoice.

Some people seem to have forgotten that the UK was an economic basket-case when Thatcher came to power. Swivel-eyed Trots, with their 1970s interventionist mentality, are entitled to disagree with her policies but they overlook the fact that the Blessed Margaret won three consecutive General Elections. More people supported her firm policies to rescue Britain from the grip of the ruinous Trade Union movement than opposed them.

But the truth is often unpalatable to those who do not want to hear it (or think that the world owes them a living.) The loony left believe that money grows on a tree at the bottom of the garden. They refuse to accept that we cannot have what we cannot afford. They simply cannot bear the thought of anyone expressing an opinion that is contrary to their deluded and misguided belief system. Perhaps this is why they have such contempt for democracy and freedom of speech?

Whenever someone on the right makes a controversial remark, the left feigns apoplexy. They have turned mock outrage into an art form. When Jeremy Clarkson joked about shooting Trade Union members, Barnet Blogger VickiM called him a c*nt.

But when Labour MP Kerry McCarthy used Twitter to suggest that a fellow train passenger “should have been killed” for wearing an offensive T shirt, this was deemed different to the Clarkson case because, as Mz McCarthy said in a subsequent Tweet, her comments were “obviously flippant.” Obviously.

Whatever people may think of Lady Thatcher as a politician, she is a human being with children and grandchildren. If the manufacturers and distributors of this repugnant range of merchandise think that her future death is worthy of celebration, why haven’t they produced similar goods in anticipation of Gordon Brown’s demise? The UK has been driven to the verge of bankruptcy by Pa Broon’s rabid economic policies. He has caused greater damage to the British economy than any other politician in the entire history of the universe. Ever. But that’s the other thing about Socialists. They are unprincipled hypocrites.