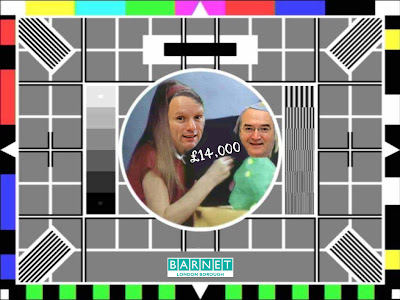 The Barnet Times has reported a row between Don’t Call Me Dave and Mike Freer over the investigation into the council’s £90,000 purchase of flat screen televisions and audio visual equipment.

Predictably, Freer is trying to divert attention from the real scandal by concentrating instead on the cost of the investigation - reported to be £9,000. This is undoubtedly a significant amount of money, but the investigation could have been entirely avoided if the council had simply told the truth from the start.

Don’t Call Me Dave repeatedly asked officers to show him the documentation authorising the purchase of flat screen television sets for Leo Boland, Emer Coleman and three other officers, yet they refused to do so. Thanks to the auditor’s investigation, we now know why. Councillors had not bothered to ask for details as to how the money earmarked for the refurbishment of North London Business Park was being spent. They just gave them a pot of money and told them to get on with it.

Freer claims that buying the audio visual equipment: “actually saved money as it meant the council no longer had to hire in specialist equipment.” What nonsense! Anyone with even just a modicum of business acumen knows that spending £90,000 to save £4,400 in annual hire charges is nothing short of stupid. No private business would ever make a capital purchase with a twenty year payback period when the equipment only has a lifespan of perhaps five years at best. On top of this, taxpayers will now have to pick up the bill for maintenance, repairs and insurance which were previously paid for by the hire company.

The council seems keener on defending its wasteful bureaucrats than looking for real savings. Whilst council tax and waste are being cut by many good Conservative authorities across London, in Barnet both are on the rise.

For the £70,000+ a year Mike Freer receives from the public purse, he should roll up his sleeves, cut out the business class air fares and tackle the culture that leads to council staff thinking that it is ok to spend £90,000 without making any effort to ensure value for money or check prices with others. If it was their own money, officers would scour the internet for the best price - why don't they do that when it is our money?

Elderly residents facing the demise of their warden service will not be impressed that Freer thinks spending £14,000 on televisions is a good use of public resources. If he attacked waste with the same gusto as he attacks Don’t Call Me Dave, our Council Tax would be going down not up.

Its a bit rich for him to complain about £9K - when he threw away £10,000.00 of our money (without asking) to help his rather wealthy friend: Mr Toad face the standards board.

So do I have it right that people who point out waste in the Council, ask for explanations for expenditure that looks bloated and blog about 'vindictive w**kers'?

Isn't usually on Labour Council Leaders who attack Conservatives as acting with 'malice' for calling for cuts in waste and taxes? Why can't this, so called, Conservative Leader attack waste with such vitriol rather than attack fellow Conservatives?

What kind of wreckless political judgement is behind such statements by someone aspires to be an MP one year before major local and national elections?

The sad truth is that the barnet tories are useless and combine the worst elements of the Tories, Labour and Lib-Dems.

Crass stupidity eventually crosses party lines. I know that Tories wont vote Labour, so it is really up to them to provide a suitable alternative. If they don't, they'll end up sooner or later with someonelike me running the council, purely as a protest vote.

In the space of a few days, there have been two reports published dealing with the financial management of the council - Icelandic investments and the purchase of televisions for senior officers. Whilst the amounts of money involved were vastly different in each case, there was one common factor: councillors abdicated control and responsibility to unelected officers.

What we are now witnessing is a systemic and wilful failure by the Executive to exert any kind of control or scrutiny over those charged with the day to day running of the council.

Freer can call me all the names under the sun if it makes him feel better, but there is simply no escaping the fact that all these management failures happened under his watch. He can blame whoever he likes, but it won’t wash with the public. The buck stops with him.