Memo to Nick Walkley: You work for us 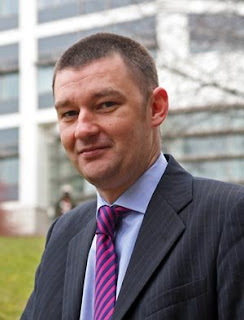 Not The Barnet Times is alarmed to have received word that a reporter for the London Daily News website was apparently instructed by Barnet’s Chief Executive Nick Walkley (pictured hard left) to turn off his recording device at tonight’s meeting of the Ad Hoc Overview & Scrutiny Committee, which was considering the report into the council’s Icelandic investments.

Whilst there are signs outside the meeting rooms in the Town Hall advising that the recording of meetings is not permitted, council officials have clearly forgotten that we live in a democracy and the public have a right to know what is going on - especially in this instance where £27.4 million of our money was recklessly deposited in failing banks.

Other councils are happy to embrace modern technology and broadcast meetings live on the internet and also make podcasts available for download. But in Barnet, we are treated like mushrooms and kept in the dark. As a result of the journalist being required to turn off his equipment, he was unable to accurately report the details of the meeting because his article suggests that Deloitte’s exonerated Mike Freer and the other Members of the Cabinet Resources Committee, which they did not. Not by a long shot.

Yesterday, it was widely reported that the former Cabinet Member for canapés, Brian Coleman, was refusing to publish details of his GLA expenses. The London Evening Standard quoted Coleman as saying: “I won't do it voluntarily. It's none of the public's business.”

Coleman’s comments are symptomatic of the unhealthy culture of secrecy which permeates through every fibre of the council’s being. It goes without saying that dinosaurs like Coleman should not be allowed to run for public office again. But if the Chief Executive believes that residents are only entitled to read the council’s sanitised version of proceedings then he, too, should forfeit his place at the public trough.

POST SCRIPT: If you need just one good reason as to why council meetings should be recorded, it is this. When the Cabinet was discussing indemnities for officers during the Underhill investigation, they agreed to provide the money on condition that it was repaid if any wrongdoing was found. When the minutes of the meeting were published, the wording had been altered so that the indemnity would only have to be repaid if the people involved were found guilty of wilful misconduct - which was something quitte different.

For months the council denied that the minutes had been altered, but in the end it acknowledged that the wording had been changed. This council simply cannot be trusted to tell the truth, and in the interest of democratic accountability here should be audio/visual recordings of every council meeting.

Given the tone of that Blog, and it's slavish support for Mike Freer and others, I suspect that the reporting would have been the same!

I think you have been slightly misinformed, in that this chap seems to have pulled out a large camera and started to take flash photos in the room! It would seem that having been reprimanded for that investigations by an Officer sitting next to him (and in turn next to Mr Walkley) may have shown the recording.

Anyway, I am sure that he will be ok as he seemed to be having a very friendly chat with the Tambourgreedies outside of Barnet House!

I think that the Council should broadcast audio and change their rules. But until such time as it does then shouldn't they be applied the same to everyone?

Thanks for clarifying the situation. In actual fact, it doesn’t matter who told the reporter to switch off his equipment. Whilst I can understand why flash photography would not be permitted as it would cause a distraction, non intrusive recordings should be permitted by right.

When the Conservatives won control in 2002, Victor Lyon promised an open and honest administration. That promise has not been formally rescinded by either of his successors. It doesn’t matter whether the reporter was a Pulitzer prize winner or a graduate trainee, how dare unelected officers decide whether proceedings can be recorded?

David Cameron has called for greater transparency in local government. Will Mike Freer once again contradict him, or will he instead instruct officers to immediately remove the signs prohibiting the recording of public meetings?