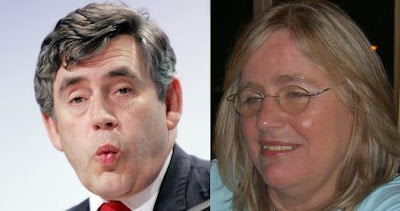 Don’t Call Me Dave was reading Simon Heffer’s erudite commentary in the Daily Telegraph today and was immediately struck at the similarity between Gordon Brown and new Barnet Council leader Lynne Hillan.

Heffer refers to Gordon Brown’s “obsession with his own rightness”. The same applies to Hillan who, despite a Court ruling and the wishes of 85% of residents, is determined to go ahead and axe the warden service for residents living in sheltered accommodation, irrespective of the consequences to the health and well being of those affected.

“Mr Brown has never been ‘joined-up’ enough to appreciate that a consequence of… spending on his clientele (and therefore on something of sectarian interest to the Labour Party) rather than on things of real importance to the country is that you end up failing to provide the things a state should.”

The Barnet Times reports that Hillan proposes “to spend an extra £434,000 to keep and retain staff” which is a euphemism for using taxpayers' money to give a pay rise to the cronies who are propping her up, rather than retaining the front line services we really want (like the wardens).

“We are in this mess because of obsession: not just one man's obsession, though that is crucial to what is happening, but because of the obsessions of others with their own personal ambitions and careers. We live in a democracy (in theory) that enjoys Cabinet government. Parliament is supposed to be the electorate's safeguard between elections; but as Lord Hailsham identified more than 40 years ago, when a government has a large enough majority, it can run an elective dictatorship between visits to the ballot box.”

With Freer installed as leader, Hillan used her position as Chief Whip to ensure that councillors were kept in line. Any sign of dissent from the ranks and they were threatened with the loss of committee chairmanships and the generous allowances which went with them. Councillors with ambition for higher political office fell into line rather than risk obscurity on the back benches or even de-selection.

“At such times, the public must rely on Cabinet ministers to put their belief in the good of the country, and their own sense of integrity, before the arrival each morning of the chauffeur-driven ministerial car. Some have; but not enough. Instead, willing victims of their own ambition, they continue to endorse a man whose record of failure would long ago have had him sacked from the chief executive's job of any private-sector operation.”

When Hillan challenged for the leadership for the third time, victory was assured. Not because she convinced Tory councillors that she had a great vision for the future of Barnet, but because she offered them cabinet positions and other lucrative posts. The councillors who made her leader put their own interests before those of the electorate. They have allowed her to hang on to the vital Resources portfolio despite the fact that she is manifestly unqualified for the position, having run her business into the ground leaving behind a trail of creditors, including the taxman.

“The public are disgusted accordingly; but whether they will be offered a sufficiently appealing alternative remains to be seen.”

Barnet’s Conservative councillors clearly hope that the anti Labour sentiment nationally will be sufficient to allow them to remain in power locally, but that is hardly a great platform on which to fight the election: “Vote for us - we’re not as bad as the other lot.”

When Alan Williams lead the Council, he was taken seriously by everyone. His Council didn't lose millions in Iceland, Aerodrome Road and he didn't have a penchant for hugely expensive bonkers schemes.

Anyone who knows the recent history of barnet will know that the "We're better than them" line is cobblers.

The Current Tory administration is probably as useless as it's possible to be.

I can’t say that I have particularly fond memories of the Williams administration. Labour plundered the reserves in a brazen attempt to buy the 2002 election. It failed, and taxpayers had to suffer the consequences. I do not believe that the current Conservative administration has a better grasp on the borough’s finances - and that seems to be the nub of the problem.

When we go to the polls in May, we are not being asked to choose the best party to govern Barnet, but the least worst. Labour has not done anything over the last 8 years to convince me that they would be any better than the current lot.

I'm not going to make the case for Labour, other than to say at least the people who voted for Alan Williams got Alan Williams. When he got kicked out he did the decent thing and let someone else have a go.

If I was a sensible Tory I'd be urging all of my friends in Bruswick to vote for the Lib Dems instead of Hillan. You could still have two Tory Councillors and keep control of the council, but you'd have done the party a massive favour. It might make a few Councillors think twice before they behave like Napoleon in future.

The strongest possible message that Tory voters could send is to have a huge turnout in Brunswick and vote for 2 Tories who aren't Hillan and a Lib Dem.

Of course, being a Lib Dem candidate, I'd prefer three Lin Dem councillors, but I'd always urge voters to follow their conscience when voting and if that is a step too far, do us all a favour and get rid of Hillan.