£9 million down the drain and still no apology 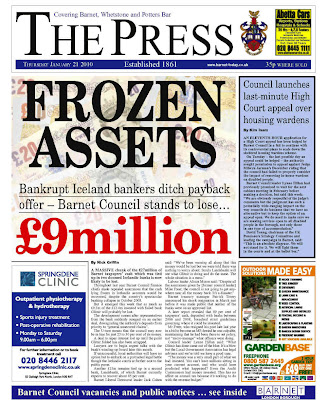 The Barnet Press reports as its lead story that Barnet taxpayers’ stand to lose £9 million of the £27.4 million the council deposited in failed Icelandic banks.

When we first reported on this scandal in October 2008, former leader and cabinet member for resources Mike Freer tried to deny that the council had done anything wrong. When that tale was exposed for the complete untruth that it was, Freer changed tack and insisted that all the money would be recovered.

That was never a realistic prospect and the latest news proves that Mike Freer was either hopelessly naïve or he was hoping to spin the tale out until after the General Election when it wouldn’t be his problem.

What made matters worse was that instead of apologising to taxpayers, Teflon Freer was more concerned at passing the buck than accepting the responsibility that comes with being leader. This evasiveness continues under new leader Lynne Hillan who told the Press: “What Glitnir has done came out of the blue.”

What nonsense! Perhaps Hillan, like Freer, buried her head in the sand because the Icelandic finance minister Gylfi Magnusson stated publicly last February that creditors would not get all of their money back.

Hillan added: “The money was a very small part of what we had invested. You can’t have millions sitting in your current account, and who could have predicted what happened?”

Actually, Lynne, many councils predicted what was going to happen and withdrew their deposits in good time. The fact that the Icelandic bank ratings were dropping was a major clue if only the Cabinet Resources Committee, of which you were a member, had bothered to read the reports.

Perhaps Hillan thinks we have forgotten that the council actually borrowed £40 million from the Public Works Loan Board (intended for the schools investment programme) and then put the money on deposit in Iceland at a higher rate of interest in a process known as arbitrage. Which just happens to be unlawful for councils.

Although the council readily admits that the interest on its investment income forms part of the budget, Hillan went on to claim to the Press: “This has no affect on council tax because it’s nothing to do with the revenue budget.” Presumably Hillan also believes in Father Christmas and thinks that the moon is made out of cheese.

I cannot recall a worse front page EVER that any Leader of Barnet Council has had. I find myself feeling like Charles Clarke MP must do watching the Party he cares for deeply being dragged down the drain by a leader completely out of his depth.

Crisis after crisis hits Barnet Council and yet no one ever seems to resign no matter what goes wrong. Figures released by the pollsters MORI this week show only 30% of Barnet residents thinks the Council provides value for money, compared to 70%+ for Westminster and Wandsworth. Unusually the Audit Commission agrees too.

As a proud Conservative I am just appalled that allowances 'for responsibility" go up and up but when something goes wrong we as taxpayers have to fork out for expensive 'packages' for officers to 'resign' and the show moves on.

The second, dreadful, story about Cllr Hillan's, in my view, merciless attack on some of the most vulnerable in the borough shows this 'laid back' 'nuffin to do with me guv' attitude of too many in her clique.

It's not good enough the Cabinet being fed muddled and confusing advice by jargon laden NuLab Officers.

A proper strong and experienced Conservative cabinet would throw back waffly and meaningless reports and asking piercing and penetrative questions taking as much time as it took to come to a proper decision. Instead cosy chats in private between Officers and Cabinet (all using chummy first names Tony Blair style), in my view, blur the lines that were set out in Porter v McGill too much.

I predicted that Lynne Hillan / Howard would use her Gordon Brown like skill to outmanoeuvre her opponents and steal the crown. I also predicted that she would be forced to resign under a cloud shortly afterwards. If this are the front pages the Conservatives are going to face as more and more of what has been going on at the Town Hall it is not just the Conservative Councillors that will suffer but I fear David Cameron will do, which makes me furious. Something needs to be done. Fast.

Reading the latest cabinet papers, 9.50 and 9.51 on agenda item number 6, there is a shocking statement that indeed the loss may be as large as £18 million, an admission that as far as I am aware has not been made before. Are the people of Barnet aware?

Thank you for this information. I wrote to the Barnet Press pointing out that, on my calculation, the potential loss was some £15.5 million when you factor in the lost interest and the deposits in Glitnir Bank. Unfortunately, my letter was badly edited!

I am shocked that the true figure appears even higher. It is a scandal that local journalists are too busy writing about cats stuck up trees to report on the really important news. I will re-blog!