Don’t Call Me Dave was somewhat surprised to receive an In Touch leaflet today promoting the Coppetts Ward Conservatives because he lives in Underhill Ward - nowhere near Coppetts! Perhaps if Cllr Lynne Hillan hadn’t been so quick to sack the previous Conservative agent - who had an unrivalled record for winning elections - this elementary cock-up could have been avoided. 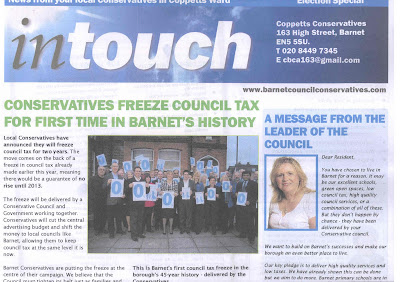 But far worse than this incompetence, was the disingenuous and downright dishonest contents of the leaflet itself. The headline story - which features in every edition of In Touch for every ward - was the boast that the Conservatives have frozen council tax for the first time in the Borough’s 45 year history. There was no mention that the Conservatives have been in control for all but 8 of those 45 years. Why has it taken so long to deliver a tax freeze - especially when proper Conservative councils across the country have been delivering real tax cuts year on year for the last 4 years?

Hillan’s Conservatives pledge to freeze council tax for a further two years. But here’s the catch. They say “The freeze will be delivered by a Conservative Council and Government working together.” In other words, if the Conservatives do not win the General Election, a Conservative council will not honour that pledge. The public are sick and tired of politicians who use a clever form of words to make promises which do not have to be kept.

Where in this leaflet is any mention that the tax freeze has only been achieved by plundering the reserves - something which the Tories attacked the last Labour/LibDem Administration for doing in 2002, when they were also trying to bribe us with our own money?

Where is the mention that councillors cost taxpayers more than £1.2 million a year and that last year the Tories voted themselves increases of up to 50% for some of the special responsibility allowances?

Where is the mention that since the Conservatives took control 8 years ago, they have increased the Chief Executive’s salary from £113,000 to £200,000 a year - a stonking 77% rise? Has your salary or pension increased by that much? Ask residents living in sheltered accommodation whether the warden service will be 77% better under the Conservatives?

Leader Lynne Hillan writes about low council tax, but the public are not so readily fooled. We only need to check our bank statements to see how much our taxes have gone up since 2002.

DCMD stated previously that it was not his job to tell people how to vote. Notwithstanding this, he is happy to declare that he will be voting for Theresa Villiers as the Conservative candidate at the General Election. But he simply cannot bring himself to vote Conservative at the council elections because the candidates are, with one or two exceptions, entirely unrepresentative of real Conservative ideology.

The thought of another Lib/Lab pact in Barnet is not especially appealing to DCMD, but it cannot be any worse than the Administration we have now. A short period of opposition for the Hillans and Colemans of this world would certainly go some way to help the local party rid itself of the hubristic troughers who care nothing for democracy or the community, who crave power for its own end, and just see taxpayers as an easy meal ticket.

Your statement that Hillan and Coleman need "a short period in opposition" would not do the Barnet Tories any good.

What would do them some good is a complete rout, where the Colemans and the Hillans lost their seats. That would give the Tories 4 years to find some new candidates who might bring some fresh thinking and some sensible policies to the fore.

I for one would work my nuts off to make any alternate arrangement in Barnet a success for the Council tax payers, so that the people of Barnet didn't feel the need to sling us out, however good the new Tory intake may be. I would certainly read blogs such as this for inspiration on tax savings, whilst improving the services I feel are important for young people and the vulnerable.

Disaffected Tories in Barnet have nothing to fear from the Barnet Lib Dems. We are committed to making Barnet a successful borough. As you rightly say, we couldn't be worse than the current crop of Tories. I however aim to be far far better.

Having spent the last three weeks taking to people on the doorstep and on the street, many people are thinking exactly the same way as you DCMD. The lack of democracy, the arrogance and the general complacency shown by the current conservative regime has got local conservative voters incensed. Many have said to me that whilst they will be voting Conservative at the general election they are going to vote for the Residents' Association of Barnet in East Barnet ward. They want local people to represent them, they want openness and they want to be treated as adults. I will be doing my utmost to get a change in the balance of power in Barnet Council in favour of the electorate, the people councillors are there to serve.