Barnet’s premier blogger, Rog T, recently complained that the Tories didn’t do sex scandals any more. Well former Deputy Mayor Ian Clement has proved our Rog wrong. Not only has Clement betrayed his long term partner and child, but he’s also been fiddling his expenses, just like the big boys in Westminster.

The Guardian’s Dave Hill has been running the story on Clement’s expenses in some detail.

Proving that you don’t need to be clever to get on in politics, it appears that Clement decided to take his lover Claire Dowson out for romantic trysts in Barnet and then charged the cost to taxpayers claiming he was actually having lunch with Mike Freer and Michael Rye, leaders of Barnet and Enfield Councils respectively. If he had just one brain cell, Clement would have known that council leaders keep diaries, and both Freer and Rye were able to prove they were not Clement’s dining partner on the dates in question.

Clement cannot claim he made an innocent mistake. He had written the names of Mike Freer and Michael Rye on the receipts he submitted to the GLA. The London Evening Standard has also reported on this story and noted that Clement's alleged business lunch on 5th November was actually a dinner date at a restaurant close to his lover’s home. The receipt is timed at 23:22. How romantic! 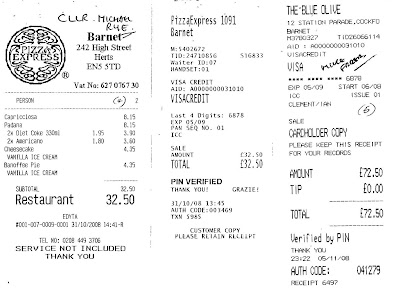 The news of Claire Dowson’s involvement in this scandal will come as a shock to members of Chipping Barnet Conservative Association where Ms Dowson is the agent. When contacted by the Evening Standard, she refused to deny her relationship with Clement or that she had been treated to meals at GLA expense, saying: “I don't want to say either way.”

These meals were paid for using a corporate credit card. Did Claire not notice the distinctive card or was she too busy gazing into Clement’s eyes? Did she not know that Clement had a long term partner and child? Everybody else did.

Claire Dowson was only appointed to her current position last year. She has been extremely foolish having an affair with a man old enough to be her father and her unsavoury behaviour has brought the Association into disrepute. If the Conservatives wish to regain some semblance of credibility in Barnet, they must sack her immediately.

If Ms Dowson really loves Ian Clement, she should learn how to bake a cake with a file in it.

UPDATE 24.06.09: A reader has contacted Don’t Call Me Dave to say that Claire Dowson is no longer the mistress, but the fiancé. Unfortunately, I have not been able to verify this as Ms Dowson has taken an unscheduled leave of absence from her office, but if true it will only serve to intensify questions as to how much she knew about Ian Clement’s abuse of his GLA corporate credit card.

At least Ms Dowson can claim something in common with Boris Johnson. Both have shown appalling judgement in their choice of associates.

I'm getting good at this calling it wrong. Maybe I should predict that the Tories are too spineless to sack Freer for iceland & Warden cuts, even thouh they know both cock ups are down to him.

I was planning to avoid political blogging this week, but what I've seen with this case is truly appalling. I had a look at the Mayor of London website for details of his appointments & what I saw is breathtaking. I feel as if I've been mugged. It is shocking

Ian Clement’s behaviour was disgraceful. Nobody can deny that. But in my eyes, and I suspect in the eyes of the public, Boris is as guilty as Clement because of his woeful failure to spot what was going on.

It’s no good Boris saying that he doesn’t do detail. In the real world, the guy at the top accepts full responsibility, not just for his own actions, but for the actions of those under his charge.

Remember Lord Carrington’s dignified resignation over the Falklands? It’s about time we had some real politicians of stature to replace the money grabbing imbeciles who are now in charge.