Not The Barnet Times does not concern itself with the private lives of private citizens. But when public figures use taxpayers’ money to wine and dine their girlfriends, then it becomes a matter of public interest.

Regular readers will know that former Deputy Mayor of London Ian Clement, 44, was forced to resign after it was revealed that he had improperly used his GLA corporate credit card to entertain his mistress Claire Dowson, 23, agent for Chipping Barnet Conservatives.

It was an open secret that Clement and Ms Dowson were an item. He accompanied her to the recent Mayor installation ceremony for his fellow trougher Brian Coleman, and Ms Dowson also took him as her guest to the wedding of backstabbing rising Tory star Sachin Rajput. 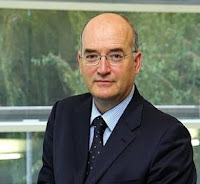 Emer Coleman, pictured right, was Director of Strategy for Barnet Council (Chief Spin Doctor to you and me) responsible for “overseeing the implementation of the council's communication and consultation strategies to ensure meaningful two-way communication between residents and the council” but who is now working on secondment to the GLA. However, according to an answer given at last week’s Hendon Residents Forum, she is still in possession of a Barnet corporate credit card.

Chairman of the Forum, Cllr Brian ‘Mandela’ Gordon was completely unaware that Ms Coleman was not currently working for the council, which does somewhat call into question her communication skills.

Whilst we are sure that Ms Coleman would not use her card improperly, that she still appears to have one is symptomatic of the slack financial controls in Barnet that led to £27.4 million of taxpayers’ money being deposited in Icelandic banks contrary to the council’s own guidelines.