We don't need no education 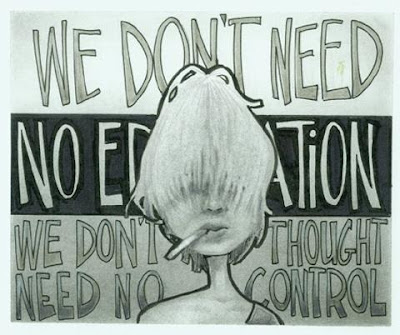 The Government’s argument for increasing tuition fees and reducing the education budget has been made entirely on economic grounds. The budget deficit has to be reduced and nothing else matters. But despite the perilous state of the nation’s finances, the health budget has been ring-fenced, as well as the overseas aid budget. Clearly education is not considered as important.

This is the root cause of the problem with higher education in this country, in that society does not value it as being as beneficial as other countries do.

Americans see education as a life-long journey and, indeed, DCMD’s American friends are always interested in knowing how he is getting on with his university course and want to know what texts he is studying. The response of his British friends has generally been along the lines of “What do you want to do that for?”

As many readers know, DCMD runs a successful business. He won’t be able to use his degree (assuming he graduates!) to try and gain promotion, but the idea of improving himself just for the sake of it seems to be a concept lost on many of his contemporaries. DCMD’s late grandfather read history books into his 90s and his mother graduated only last year with a Masters degree at the age of….well it would be rude to say! The day we stop learning is the day we stop living.

DCMD is a huge fan of the journalist Simon Heffer, both of his masterful style of writing and his incisive political wit. But on the subject of tuition fees, Heffer is completely wrong. He talks of education being a privilege, whereas DCMD considers it to be a right. It is true that you do not need a degree to operate the checkout tills at Tesco, but if the checkout operators wish to improve themselves through higher education, we should welcome their decision and encourage their aspirations. To suggest that only certain people should go to university is a type of educational apartheid that we should consign to the history books.

There is enormous snobbery attached to the education system. Former polytechnics are considered to be inferior to “real” universities and people with “real” degrees are always complaining about the proliferation of so-called “Mickey Mouse” degrees. An arts degree does not qualify a student to carry out brain surgery but if it turns students into better people, who is to say that that is not a socially desirable outcome?

We do need more doctors, engineers and scientists, but that should not be to the exclusion of everything else. DCMD acknowledges that society will not benefit from him gaining an English degree - he will be far too old to do anything with it - and there is a case to be made that he should pay more of the cost, notwithstanding that he would have been entitled to a fully taxpayer funded education when he left school 30 years ago. But the majority of younger students will be able to use their degrees, even if not directly, and there is a quantifiable benefit to society in that.

Mayor of London Boris Johnson has developed a well earned reputation for buffoonery, but on the matter of restoring Latin education he is 100% correct. DCMD studied Latin to ‘O’ Level standard and can still recite the whole of “Show me the way to go home” in Latin which he was once able to put to practical use!

In its leader column yesterday, the Daily Telegraph suggested that the alternative to raising tuition fees was to load the cost on to taxpayers who do not benefit from a university education. This was an entirely false premise because society as a whole benefits from a highly educated workforce. Given that we don’t manufacture very much any more, we will be dependent upon a knowledge based economy for our future prosperity.

Nobody disputes the need to reduce the deficit but students did not cause this recession, yet they are being asked to suffer the consequences and pay for the profligacy of others. The government should cut waste and bureaucracy before mortgaging our children’s future without their consent.

DCMD despairs of the politicians and bean counters who know the price of everything and the value of nothing. Students are right to be fearful for the future of higher education, but it is the whole of society which will lose out.

Well, at least you see the difference between the privileged getting the better education from primary school to completion of the degree and the kids who come from the poor background of council and housing association estates who may never raise the loans to subsidise that one member of the famly whom does have the ability to do so.

The old polytechnics whatever their subtitle since 1997, gave many different people whom did not gain the GCE 'O' and 'A' levels the opportunity to gain a degree while the kids were at school during the day and the office and shop floor worker by the evening. It was un-necessary to allow the whole lot of them to do so when many were not prepared for it. Secondly, there was not enough in the education pot.

While I'm an ardent fan of Cicero, it's easier in English than Latin but the language of future, given the emerging natural resources of South America, is Spanish along with Mandarin and Hindi.

The equivalent of the UK department store employee in some other European countries would have to go through a vocational college or technical school. Indeed a couple of my in-laws went through that system to become carpenters and furniture makers, a builder, a plumber and, the others to University both in their native country and Germany. Switzerland Austria Scandinavia have a similar system of education and training to Germany, where I lived and worked for a couple of years.

The real issue Governments seem to be afraid off, is that the whole British educaton system needs reform bottom up, not the tinkering and ad hoc tampering of New Labour in their attempt to have, "an higher education for all." Until that reform takes place...

If someone wanted to train as a mechanic or gas fitter, then arguably an apprenticeship would be of far more value to them than a degree in, for example, dance studies. But very few school leavers can say with any certainty what they would like to do for the rest of their lives.

There is nothing wrong in taking evening classes throughout your adult life to brush up on some skills or gain completely new ones and for many people it becomes a necessity if they suddenly find themselves made redundant in middle age.

The point I am trying to make is that we should view education as being beneficial for its own sake. We can scoff at so called trendy arts based degrees, but if we only train people to become scientists and doctors, who is going to produce the plays and films that we all like to go and see? Who will produce the music we want to listen to? The arts contribute to the economy and our well being, which even David Cameron now recognises as being a good thing.