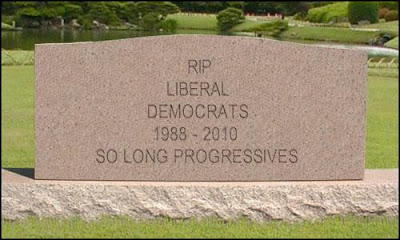 Today marks the end of the Liberal Democrats as a serious political party - assuming that they were ever thus.

In the Commons vote on tuition fees this evening, some LibDems will vote for the increase, some will vote against and some will abstain. All things to all people.

You cannot be considered a credible political party if you cannot make up your mind on a matter of such national importance.

The problem for the LibDems is that they are so used to being in opposition, they never actually considered the possibility that they might have to honour their promises.

If Nick Clegg had any principles, he would resign. But the way he reneged on his personal manifesto pledge proves that he has none. He sold his soul for a ministerial car and a red box.

It is hard to imagine anything other than total electoral wipe-out for the LibDems at the next election and that can only benefit the Labour Party.

Very sad day today. I hope you are absolutely right.

The LibDem did make up their mind. With contempt for their core voter and anybody who voted for the LibDems they agreed to be cheats liars hypocrites and devoid of any moral or politcal integrity.

However, I differ slightly from your view on Labour next election. Unless they get their act together very soon and understand that the meaning of the 'red flag' in a modern Europe has changed, then they have no chance.

It is fair to say that Labour are as bad in Opposition in Westminster as they are in Barnet! David Cameron doesn’t just make mincemeat of Ed Milliband at PMQ’s, he positively humiliates him (so much for an end to Punch & Judy politics). The risk with this tactic is that the British love the underdog and might therefore start feeling sorry for Milliband. My guess is that Labour will have their IDS moment within 12-18 months and Red Ed will be replaced as leader.

The Labour opposition seems almost irrelevant to most people. They want to influence the Coalition directly, and don't seem drawn towards doing so through an oppostion party at all.

Maybe that will change later in the Parliament.

But just as Barnet's shower are no advert for self-reliance and non-State activity in society, neither, seemingly, is this goverment of millionaires and LibDems.