Can we have the one with the banana?


In an interview with the Daily Telegraph, Stupid Boy Ed Miliband explained why he thinks David Cameron does not understand the views of ordinary voters: “Because he’s a Tory.”

Well that’s a really mature and constructive comment from the leader of the only major political party to officially have no policies.

Is it too late to have the more sensible Miliband at the helm? 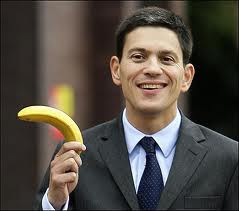 Is it too late to have a more sensible government at the helm ie neither Tory nor 'Tory lite' Libdems?
How about speculating about a more sensible Tory leader than Posh Boy, come to that?

You know from your own experience of Barnet what happens when you have a pisspoor leader of the council and an equally useless leader of the opposition. A strong and healthy democracy requires strong opposition to keep the Executive in check. If Dave is as bad as you think he is, it is even more important that Labour elects someone who is up to the job, which Ed patently isn’t. The good old trade union block vote working to keep us all screwed.

I think that Ed is less awful than David, who is a cold fish and tainted with the Blairite associations. Being less awful seems to be about as good as gets in modern day politics.
Cameron is a lightweight, and his policies so flimsy you can see daylight through them: Big Society/Futureshape - same soundbite politics with no substance, disastrous because they are accepted as the way forward before being created in any detail.

I heard todays 'knockabout' in the Commoners earlier today. At the moment Ed sounds a bit like both Will vHague and an IDS taking on Blair, both quit, and when it came to David Cameron's turn, he was the same, however, he really did srike it lucky when Blair did a runner.

Ed can't be that poor to have 'mugged' the unions into voting for and turning over his older Bruv. No question that big bruv' David with his quiet charm that won admirers all over the globe would have turned over Cameron time and again. I don't think Millibrand Snr, would have been too different to Ed. Neither would be doing well unless they have something to beat the other guy with, at the despatch box, given the stock answer of, "Look you got us into this mess" what would you do? Both Ed and David have at least a year to work that one out. I'm fairly sure a couple Labour geezeers Frank Field and somebody ha helped to reform some aspect of the welfare state.

Let's see where Ed is taking Labour in a years time. Love the title of the blog, after all it must hurt when one slips up on the banana skin a bit of R&R and a book might find the more Sensible Millibrand running the show in the background, hopefuly not in the Mandelson type of Labour.