We are all Thatcher’s children 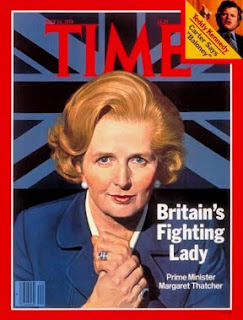 According to the annual British Social Attitudes report, Britain is now a more Thatcherite nation than when the Blessed Margaret was Prime Minister. After 13 years under Labour rule, many adults now believe that economic inequality is down to “individual laziness on the one hand and hard work on the other.”

Interestingly, and perhaps surprisingly in light of the above, the research also showed strong support for increased public spending on health and education - the latter about to be slashed the new Government.

Cue the usual anti-Thatcher Socialist drivel from the usual suspects.

Let me be the first to oblige, DCMD.
I'm assuming the 'individual laziness on the one hand' would apply to the greedy little bankers who want to make vast personal profits at the expense of the country just by sitting on their lardy a**es and moving imaginary money around,or 'consultants' paid enormous amounts of Barnet tax payers' money, or Tory councillors receiving an extra £7,000 k a year for sitting through a couple of meetings, at a time when the lowest paid workers are being meade redunddant; and the hard work being the less well rewarded work of nurses, care workers, teachers, fire fighters etc?
I would argue that the current crisis, in fact, has its roots in the years of laissez faire economics, presided over by your pin up girl ...

How typical to blame Thatcher for things that happened 20 years after she left office. Gordon Brown’s failure to regulate the banks and his reckless expansion of the money supply don’t even get a look in. The situation with council consultants and allowances is as a direct consequence of the Local Government Act 2000 introduced by a certain Anthony Charles Lynton Blair.

The Localism Act gives local authorities the option of returning to the "committee system" (which was also a Blair LGA2000 measure, I presume).

I don't suppose the Kremlin in Barnet would be interested in that change.

No doubt someone will correct DCMD if he is wrong, but under the proposed bill, councils will decide whether to restore the committee system, not electors. As baarnett implies, there’s more chance of Turkeys voting for Christmas than there is of Barnet’s back bench councillors wresting control from the Executive who control the committee chairmanships and thus the allowances.

I think DCMD is wrong on this. There was a reason that Blair didn't allow Councils to retain the 'normal' way of running a Council ie with all of the Councillors involved - they would have voted for it!

The Cabinet system only exists as Parliament forces is on Councils. There is an automatic built in to each and every Council - in Barnet's case 53 v 10 - to scrap the imposed Cabinet system. Why would any Councillor not wish to vote to make everyone a member of the Cabinet? Would be against the interest of every member of the Council and they would need to do it only once.

I have yet to read the Localism Bill in detail but I suspect (as the way of allowing the Committee system is to remove bits of the LGA 2000 prohibiting it) that a referendum may be allowed to switching to it.