Don’t Call Me Dave has received a deeply worrying e-mail from Barnet Council. Regular readers will be aware that for almost a year he has been trying to obtain details of the expenses paid to councillors since 2006, even though the council is required by law to respond to Freedom of Information requests within 20 working days. 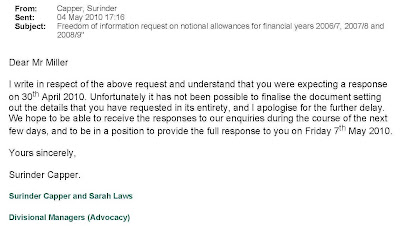 The council intends to provide a response on 7th May - the day after the elections. How convenient!

In February, DCMD posted a blog listing the catalogue of excuses received from the council for not providing the information requested. Two weeks later, a limited amount of information was released but, since then, it has proven impossible to obtain the missing details.

In March, Chief Executive Nick Walkley wrote to DCMD acknowledging that the council’s failure to provide the information was unacceptable and promised an investigation which he said would be quick! A council officer subsequently wrote to councillors on 14th April asking them to check the figures. In response, Mayor of Barnet (who else?) sent an e-mail to the Tory councillors saying:

This e-mail was widely seen as an attempt to obstruct the democratic process and prevent the public from finding out just how much councillors have claimed in expenses. The tactic seems to have worked because despite the council’s Deputy Chief Executive writing to DCMD last week to say that the information would be provided by 30th April, the deadline has suddenly been moved to a date after the election.

It is impossible to underestimate the abuse of process which we are witnessing here. The council has deliberately and unlawfully withheld information from the public which might influence the way they cast their votes tomorrow.

This is an unprecedented scandal which requires an urgent and independent investigation by the statutory authorities. The Chief Executive will need to consider his position and any Councillors who are found to have interfered with the public’s right to information should be prosecuted and barred from ever holding public office again.

I hope that you have contacted the ICO. This is appalling. I can't say I am suprised, having had a similar experience. It's time an urgent official investigation was made into all allegations of information 'management' for political purposes. Whether from incompetence or more sinister reasons, the witholding of potentially politically embarrassing information must not be tolerated.

I don’t know the extent of the Information Commissioner’s powers which might be limited, for example, to only being able to order Barnet to release the information, rather than carrying out a thorough review of the council’s processes.

This incident is not the first occasion where the council has unreasonably delayed providing information, but it is the worst example I have ever heard of since the Act came into force and it is hard to escape the conclusion that it is a conspiracy rather than a cock up. None the less it does accurately reflect the systemic culture of secrecy which operates in Barnet and which needs to be crushed.

Enough! How long do you think a private company could stay in business for without knowing its expenses? I ask the council, ask any business what its expenses were for the previous month and the answer would be ready in a matter of minutes!
I say you simply don't care because you don't have to account for it. I say you abuse it to supplement your earnings and consider it a perk! I say you are as bad as Mr Duck Pond! And I say if you are so incompetent as to not know the answer or don’t have the savvy to deliver it you need to go and go now!

I agree with you entirely - the council must know how much it has been paying councillors each month, which is why I am particularly concerned to have been told the reason for the delay was to allow councillors to check the figures. Why? This FOI request was none of their business.

Unfortunately public authorities do not act like private companies which is why this country is in such a mess.