Well surprise surprise! On the day after the elections, Barnet Council finally released details of the expenses claimed by councillors. The figures show that LibDem Leader Jack Cohen and Tory councillor Joan Scannell have both repaid money to the council for personal telephone calls which they had previously claimed from taxpayers.

As regular readers will recall, Don’t Call Me Dave first requested details of expense claims over a year ago. Since then, the council produced an ever more imaginative list of excuses for not providing the information before first claiming that the details would be provided by 30th April and then, after an e-mail from Brian Coleman, moving the date to 7th May - the day after voters went to the polls.

Click the image below to enlarge or here to download the complete spreadsheet showing all the claims from 2006 to 2009. 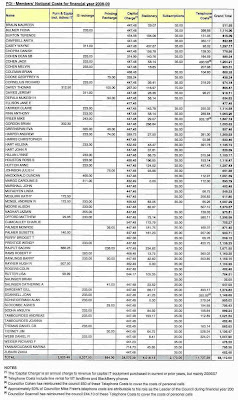 The amount repaid by Jack Cohen was £60 and by Joan Scannell £44.10 - not quite on the same scale as the MPs expenses scandal, but taxpayers' money all the same.

Three questions arise from this:

1. Would it have made any difference at the polls if voters had known that their candidates had claimed for personal telephone calls?

2. Does anyone believe that these sums would have been repaid had DCMD not made his Freedom of Information request?

3. Does anyone believe that Jack Cohen and Joan Scannell are the only two councillors in Barnet who have used their taxpayer funded expense accounts to erroneously claim for personal items?

Barnet’s Chief Executive Nick Walkley is paid £200,000 a year. For that money he needs to explain to the public precisely why it took so long for this information to be released, why there was an abject failure by the council to properly scrutinise the claims made by councillors, and what steps he is taking to prevent any future absues of the system?

1. Would it have made any difference to the election? Probably not.

2. You're right in saying the sums wouldn't have been repaid. But what is the cost to the Barnet taxpayer for your efforts in trying to embarrass people in public office? The people you refer to are decent people. I suspect the costs you've generated are far greater than the amounts repaid. Thanks for wasting my money.

3. The standards you set and expect from other people are unrealistic. Why would anyone, from Nick Walkley down, want to assist you with information when all you do is attack everyone.

And by the way - ‘absues’ is spelt ‘abuses’ or am I being unrealistic in expecting you to be able to spell?

Maybe thinking people's whose salaries we pay should work for us in unrealistic?

Maybe Council Tax payers shouldn't be paying for Councillors private phone calls or brand new desks, chair, filing cabinet (that are designed to last much longer than 4 years) every 4 years?

Maybe, just maybe, we'll have public officials (elected or otherwise) who see the money the Council holds as the taxpayers and not their own - how nice would it be for them to think... "Hmm, £3,500 on a TV - don't they sell similar ones in Comet for £800".

Or maybe you are right and we should just let them get on and p*ss all our money down the drain and not moan when Council Tax goes up and up...

I am truly sorry for having such an unrealistic expectation that the council should obey the law and publish information which the Information Commissioner has previously stated should be published automatically without anyone having to ask. I also apologise for expecting councillors to be honourable and act with integrity. How stupid of me not to realise that fraud, when perpetrated by public officials, doesn’t really matter if it is only a small amount.

If your best response to this post is to pick me up on one minor spelling mistake, then God alone knows what you must do if you ever receive an e-mail from the barely literate Mike Freer.

Council tax hasn't gone up this year.... which is nothing to do with me.

I fully appreciate some of your points but to keep attacking people for such small sums.... Cohen and Scannell... £100.

Your FOI requests will have cost more than that.

xit53: really darling, if you want to be childishly pedantic, one might reasonably ask you to put a question mark on the end of the second sentence in your third point ... in response to your comments, you appear to have overlooked the fact that the information DCMD has had to struggle to obtain should already be in the public domain, and any expense incurred to the Barnet tax payer has been caused entirely by the council preventing the same tax payer from knowing what our elected representatives are doing with our money. DCMD is to be commended for having the determination to pursue this matter.

You voted to increase Council Tax year after year, and voted for it to be theoretically frozen this year. I say theoretically as the 'freeze' is dependent on unspecified and risky 'savings'. Without those 'possible savings' Council Tax will have to fill the gap.

On the issue of the Council paying for personal calls, it's not the money it's the principle. a) the Council shouldn't be doing it b) Councillors should be using private phones for private calls, just like the rest of us.

You mentioned the cost of FOI requests. I share you outrage at the sloppy bureaucracy at the Town Hall. It is a scandal that it costs so much to fulfill FOI requests. I find it shocking that certain Councillors and ex-Councillors seem to boast at how much money and time it takes for the Officers to supply simple information. If I were them I'd find out just why it takes hours and hours of procrastination and paper shuffling to answer simple information which most often is at the fingertips of Officers.

Other good, strong Conservative Councils have set up panels and committees of Councillors (which cost nothing) to oversee and investigate the handling of FoI requests and complaints. The result has been a huge streamlining of the way they are handled and big improvements in customer service.

Barnet wouldn't want to do that as it seems to me that it is fundamentally and principally against openness, fair treatment of all and holding Officers to account.

It wasn't a question.

Please read what's written, not what you think is there.

I'm with Mrs Angry on this one. The first word in the sentence is "Why". It is quite clear that xit53 is one of our beloved Barnet Tory Councillors as he's too lazy to even read his own comments.

What bizarre comments. xit53 thinks that a CEO should be able to withhold information just because someone may find some shenanigans going on and criticise the council.

Come on councillor, tell us who you are so we can send a few FOI requests in to see what you've been up to. It clearly isn't anything very useful. We all pay enough council tax, so we're entitled to a few laughs for our dough

Hold on please - Have we established that councillors actually overclaimed, and were made to pay money back? Or did they simply submit physical telephone bills, saying they thought their personal calls were a certain amount and not part of their claim. "Innocent before being proved guilty." I think.

Furthermore, we cannot expect councillors to spend time on what can be extremely tedious, detailed work at times, without recompense.

However, that does not excuse the authority from playing fast and loose with information. The £4.5-billion Brent Cross scheme, for instance, is nailed right down in the council, and Freedom of Information requests on that (and Colindale and Mill Hill East) are just [unlawfully] totally ignored.

In the first draft of the expenses for the period 2008/09, released by the council in February 2010, telephone claims were listed without comment. I published this on this blog at the time. In the revised version of accounts provided by the council on 7th May, they added a footnote indicating that two councillors had repaid some of their claims. This repayment clearly occurred between February and May 2010. I think it is quite clear what happened and it would be insulting our intelligence for councillors to suggest otherwise.

A Freedom of Information Act request for all the correspondence, emails, and so on on those specific cases awaits your request to the council!

(For instance, why did the subject of repayment arise? Why were the repaid amounts set at those levels? What negotiation was carried out, and by whom?)

This, it is true, costs public money, but maybe it is justified.

I’ve read the Citizens Chronicle/Not The Barnet Times over the years.

I had hoped that some readers might appreciate my view that vilifying people in public life for a £40 mistake – described rather emotively as abuse – was harsh.

I was totally wrong. My view attracted zero support. I sincerely hope you all live up to the incredible standards you set for everyone else. I’m quite pleased I don’t know any of you.

I know this is hard to believe but I genuinely have sympathy for Politicians, regardless of party.

My short foray into the ‘blogs’ world has been a fascinating insight into some of your personalities and it's over.

A complete waste of ten minutes.

You raise a good point. I do think the council should explain why it has taken so long to deal with this request and also why there has clearly been little to no scrutiny of expense claims in the past.

But I don’t see why any of this should actually cost the taxpayer anything. The council appears to use the argument that if a request takes X hours to answer, then the cost to the taxpayer is X multiplied by the average wage of an officer in the democratic services department. But the officers get paid whether the public submits any FOI requests or not. Or is the council suggesting that officers had to be paid overtime to deal with the request?

PK (or should that be KP, the former Tory councillor for High Barnet?) you miss the point. Neither of these councillors has apologised for their erroneous claims. If they were honest mistakes, then why can’t they publicly admit it and just say sorry?

I remember KP’s guiding principles. Honesty. Integrity. Sincerity. It’s not too much to expect of those who hold public office.

Your "short foray into blogs". Your profile shows that the "ten minutes" started in July 2009 and that you've set two blogs up.

You seem to be rather happy to play fast and loose with the facts. You imply that I've vilified the two councillors in my comments, untrue. I took issue with your view that Nick Walkley shouldn't fulfill his legal responsibility because DCMD may attack people with it.

Xit53: pedant's corner first - it was a question (maybe not in your head, but in terms of your comment)and unless you write the sentence in an more affirmative way, my dear, you need a question mark.
More importantly, this issue is not about vilifying people: the expenses information should already be accessible to public scrutiny. The necessity of requesting the information via a FOI request was not the fault of DCMD, nor was the obstruction and prevarication which must have wasted a vast amount of officers' time on what was a political matter. The most significant point of all this is the way in which Barnet is apparently failing to follow the FOI act: whether from incompetence or more sinister motives, this is unacceptable and needs to be challenged.

Not on par with the money you have cost Barnet Council then David! I am awaiting my figures for that!