Barnet should learn to Welch 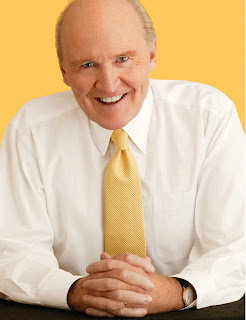 Last week, the Council debated the Scrutiny Committee’s report into the way £27.4 million of our money was recklessly invested in the failed Icelandic banks.

Needless to say, the report was watered down to detract any criticism of the Cabinet Member for Resources (Mike Freer) whose committee was required under the Constitution to set and monitor the council’s treasury investment policy.

Politicians are a pretty discredited bunch at the moment. To regain the public’s trust, perhaps Cllr Freer should consider the wise words of Jack Welch, the retired chairman of General Electric Corporation:

“As Leader, you must take the blame and accept responsibility for any failings or mistakes that your people make. Never never never publicly blame another person for a failing. Their failing is your responsibility - true leadership offers no hiding place for a true leader.”
Posted by Don't Call Me Dave at 19:34

I'm sure I also heard that great brave Conservative, Damian Green MP say sharply today that 'Cabinet Members are paid to take responsibility for the Officials'.

It a great shame that the Cameron's Conservatism shows little signs of being accepted at Barnet Council where no Cabinet Member has ever resigned. Seems there are 'Jobs for Life' some places still.

Maybe you should rename your blog "The duracell bunny" because it goes on and on and on!

I wonder if Mike has taken an injunction out yet! I would.

Good post, although it strikes me that it is as applicable to the son of the Manse, Gordon Brown, as it is to Mike Freer. Of course, taking responsibility is anathema in the current political and business environment so don't expect any change soon, on the left or the right, but it would be so refreshing to hear somebody who got it wrong say, "yes, I am to blame".

Anonymous, on what grounds could Cllr Freer injunct David? Has he lied, has he misled? I'll lay odds that he hasn't. Perhaps you should be less of a barrack room lawyer and front up with a view (and a name) of your own. It's people like you who give democracy a bad name. I am incensed by your crass and unoriginal comment. I would go on, but I think you get the drift...

Anon. The only injunction is likely to come from Jack Welch who's pic Don't Call Me Dave has nicked without attribution :P