Nudging - or brainwashing to use the correct term - is the latest buzzword to describe the method by which politicians seek to control our behaviour if we refuse to be good boys and girls and act in a manner the state deems to be acceptable. 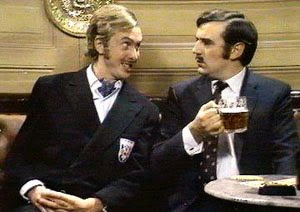 Mr Freer was interviewed by Daniel Finklestein for the programme “Persuading Us To Be Good” broadcast on BBC Radio 4 this week.

The idea behind ‘nudging’ is that the messages are supposed to be subtle and discreet - almost subliminal. In Barnet, however, the nudgers are in your face, knocking on doors and telling people to repent their evil ways.

In the interview, Mike Freer says:

“The council has a leadership role. The role of the council has shifted over the last 10 or 20 years from simply being a provider of services, to actually being responsible for helping local citizens improve their lives. I think basically nudging people along - it’s a terrific idea…”

Compare these words with Freer’s recent column in the Barnet Press:

A classic case of the left hand not knowing what the right hand is doing.

Perhaps this lack of communication between Mr Freer's hands is the perfectly innocent reason for his 'one-handed bloggers' comment.

Perhaps he assumes that it is the same for everybody - nudging with one hand while winking with the other.

There's nothing wrong with encouraging people to be good neighbours. However, stress and conflict are often the result of poor planning and overcrowding.

Instead of this rather 'creepy' initiative, Mr Freer would do far better to abandon his wholly unwanted 'regeneration' plan for Cricklewood which will cause much distress for the good citizens already living there, lowering the quality of life and hugely adding to traffic congestion.

This plan has nothing to do with regeneration, but is all about cramming as many people into one area as possible - thereby giving the Council a new source of revenue in the form of Council Tax.

If Mr Freer is serious about asking "what do you think you need?", he should listen to what people are saying. Scrap the scheme!

Erm David I think you will find that in actual fact it WAS NOT taxpayers money that Cllr Freer spent on the whole 'Nudge' stuff.... it was in fact money from central coffers!

Tell me Amanda, who provides this money from "central coffers"? The tooth fairy?