Coleman Does It Again!

Another Not The Barnet Times Exclusive!
Just eight days after being found guilty of breaching the Members Code of Conduct, Brian Coleman has once again been sending offensive e-mails over the council’s servers.

Richard Cornelius, Cabinet Member for Community Services, sent the e-mail below to his Conservative colleagues on 18th September. (click image to enlarge) 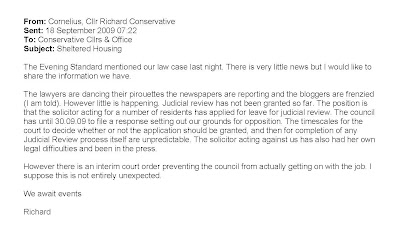 “PRIVATE AND POLITICAL. Let us hope the dreadful Hossack woman is struck off by the Law Society , in the current climate the sensible nature of Barnet's changes is becoming more evident every day.”

Yvonne Hossack was facing six professional misconduct charges brought following complaints made by Northamptonshire, Hull and Staffordshire councils after she had challenged their attempts to slash their warden services.

But, no doubt to Coleman’s chagrin, the Law Society cleared Ms Hossack of these charges. The disciplinary panel found that an allegation relating to disclosing information to a third party did breach a rule at the lowest level but decided that it warranted no further action.

Despite being found guilty, Coleman escaped punishment for calling Rog T an obsessive poisonous liar because Barnet’s Standards Sub-Committee decided that his remarks were not at “the serious end of disrespect”. A few hours later, he was celebrating his conviction with Champagne in a local restaurant. But in the world according to Coleman, a respectable Solicitor doing her job should have been struck off. Fortunately, the Law Society has more sense than the former Cabinet Member for canapés.

Despite all the negative publicity about the loss of warden services, Brian Coleman clearly supports this policy which he thinks is sensible “in the current climate”. A bit rich from the man who has just grabbed himself another £15,000 in allowances.

Coleman marked his e-mail “Private and Political”. As Mayor of Barnet, he is supposed to be politically neutral. Is another trip to the Standards Committee on the cards?

For some reason I cannot see Cornelius' message. However, I wonder whether Coleman's message has been brought to Yvonne Hossack's attention. Defending a libel case at the same time as a trip to the Standards Committee should keep Coleman busy... Adam