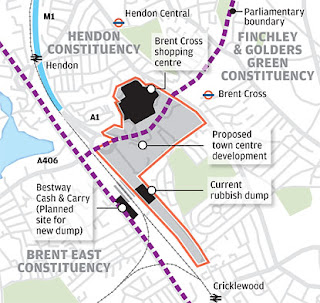 In a shock announcement, Barnet Council has announced that it intends to defer the Brent Cross planning application by a month. Cllr Maureen “I didn’t know I needed planning permission for my shed” Braun, Chairman of the Planning Committee said:

“I will be recommending to colleagues that we defer hearing the application for the Brent Cross Cricklewood redevelopment. This is both a very large and a very important scheme for the future of Barnet. We have had several detailed representations in the last few days and it is important that the council gives these the fullest consideration. I want everyone to appreciate that representations will be dealt with professionally, transparently and in full.”

Quite coincidentally, the announcement comes after the Barnet Times reported that public objections to the proposals had gone missing.

Cynics will argue that the delay allows time for Mike Freer and Brian “I am not going to differ from the leader in any matter of any sort in public or in private” Coleman to resolve their differences over this contentious development.

Council Leader Mike Freer - who is also the Conservative Parliamentary candidate for the constituency most affected by these proposals - will be anxious to avoid a public row with his own lieutenant with the Party’s crucial annual conference less than two weeks away.

The whole scheme should be scrapped. It's not a 'redevelopment'- which would suggest an additional development added to or replacing an existing one.

This is a totally new development, the aim of which is to cram as many people into a small area as possible.

The surrounding area already suffers from bad traffic congestion on a regular basis. There would be total gridlock if this scheme were to go ahead.

The most recent development next to the Holiday Inn (on the old Safeways site) causes regular bottlenecks because the shopping park does not have enough car parking space for that number of customers.

It's a total mess. If Barnet Councillors want to be re-elected, they should start listening to what people are saying.

No to the new development!

You may like to start a new blogging topic: I have sent the council an email about audio recording of council meetings:


Your colleague Ms. Chaikin has kindly sent me a copy of page 21 of the Minutes of the London Borough of Barnet "Policy and Resources Committee" of 20 October 1993.

Whatever else it says, it does not seem to be the piece of legislative enactment I was expecting: from that date on, to lawfully ban members of the public from making audio recordings at Authority meetings. Even if it was, there is no legal continuity to the present day (unless you wish to demonstrate otherwise).


I wish to assert that the London Borough of Barnet has no current legal authority to ban the press and members of the public from making audio recordings at any Barnet Committee Meeting (including Full Council). Since there is no lawful regulation to say otherwise, Common Law allows recordings to be made (for instance, on any mobile phone) does it not?


(This does not stop you from lawfully enacting a NEW regulation - would that have to be passed as an amendment to the "Council Procedure Rules" by the Cabinet or by Full Council? How much notice would have to be given? Would there be public consultation?)


Does the Authority agree with the assertion?


If not, please reply with your counter argument, and complete the sentence below, and "Reply All" with your email, so that the local press are also informed.


Please allow me to also request a reply as soon as possible, since this matter was first raised with the Authority some time ago, and the subject, whether by accident or design, has been drifting.

Thank you for your kind and prompt assistance in this matter.

Thank you for your posting. This is an important issue which other people have raised in the past. When I first started attending council meetings, it was a common sight to see local journalists with tape recorders on their desk. You would expect nothing less in a democracy and the council never complained about it at the time.

You may wonder why there has been a change in policy. I suspect it may have something to do with the fact that a recording was made a couple of years ago which proved that the Deputy Chief Executive had made a false statement to the Cabinet, knowing it to be false (the technical term for this is lying).

Many enlightened councils across the country actually broadcast their meetings on the internet. This is how it should be in a democracy. But Barnet operates in a culture of secrecy and is clearly stuck in the dark ages.

There is no reason in law why meetings cannot be recorded and I agree with your suggestion that for the council to prohibit recordings, they must pass a resolution. The public have a right to know why recordings are not allowed in Barnet.

When I previously raised this issue with Cllr Freer, he passed the buck to Cllr Hillan but nothing has happened.