On 5th March, Mayor of Barnet John Marshall will be hosting a dinner for former Chief Executive, Leo Boland at The Haven restaurant in Whetstone. 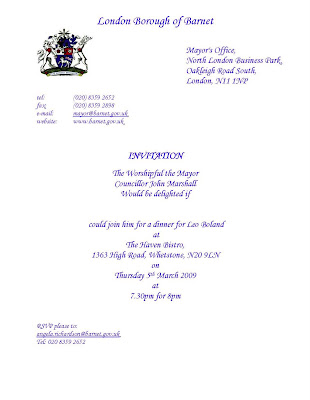 The big question is, who will be paying for this? Is Cllr Marshall, out of the goodness of his heart, paying from his own pocket or will he be using the Mayoral allowance provided by us, the taxpayer?

This allowance enables the Mayor to host civic functions throughout the year promoting the Borough. It is hard to see how the needs of Barnet are best served by providing a slap up meal for the former Chief Executive, who dumped us at the drop of a hat for a £200,000 pay cheque from Boris.

Let us not forget that during Boland’s time at Barnet:
No doubt our Leo will claim that none of this was his fault. Perhaps he feels he should receive a “Goodwin” at the taxpayers' expense, let alone a dinner at an expensive restaurant.

We are in the midst of a deep and painful recession and the public requires their elected representatives to lead by example.

If John Marshall is paying for this dinner personally, good luck to him. I hope they all have a nice evening. But if taxpayers’ money has been used for a private dinner, then it will not just be a case of snouts in the trough. It will be a case of the political classes, out of touch with reality, sticking two fingers up at the public at a time when residents are tightening their belts and cutting back on luxuries.
Posted by Don't Call Me Dave at 23:04

I emailed Mike Freer earlier in the week to ask whether Councillor Marshall was paying out of his own pocket or out of his Mayoral Allowance.

It may surprise you to know that Mike Freer chose not to answer the question (although he did answer immediately a previous question).

To David, you would have thought that they could have chosen a better restaurant, but, matters of restaurant choice aside, if the meal is to be paid for out of the mayoral allowance, doesn't this behaviour typify the reckless and even cynical disregard the elected representatives of Barnet have for the taxpayers?

Still, I'm not doing anything next Thursday. D'ye fancy gatecrashing to see who pays?

The question was "Where was the source of the cash-John Marshalls pocket or his mayor allowance.

there is no scrutiny of the maoyoral allowance. trouser the cash? spend it on functions? who knows? its only tax payers money.

All public expenditure should be properly scrutinised. I have already asked the council whether separate accounts are prepared for mayoral expenditure and whether the Mayor is required to return any money from the allowance which is unspent after the end of the council year.

I am sure most residents would support a modest mayoral allowance to be spent hosting civic receptions to promote the interests of the Borough, but it should not be spent on private dinner parties of no benefit whatsoever to taxpayers.

We still don’t know for certain who is paying for this bash, but the fact that the invitations were sent out on council letterheads suggests that it will be us.

Adam, it would be highly irresponsible for anyone to suggest there should be a protest outside the restaurant!

The earlier question was along the lines of whether the Taxpayer was funding Leo Bolands leaving do and whether Cllr Freer thought it was beneficial to the Barnet Council Taxpayer if it was publicly funded.

The answer was that MF understood that the mayor was paying

The follow up question sought clarification as to whether the Mayor was paying from his pocket or his allowances.

I've still not heard. I don't expect to hear. I suggested that Mike Freer may like to spare the Taxpayer the expense of an FOI request and just tell us.

Whilst he objects to David incurring these fees he doesn't actually answer the question and save the request and the cost. Next time a FoF complains about the number of freedom of information requests, you may wish to recall ewhy these occurr.

It would take just a few seconds for the Mayor to answer the question. He, above all others, knows who is paying for the dinner. It wouldn’t cost the taxpayer a penny for him to tell us the answer.

If, as many of us suspect, the cost is being met from the public purse, then he isn’t going to respond to questions because he would then have to justify the expenditure. Even for an experienced politician like Cllr Marshall, justifying the unjustifiable is not an easy task.

It is far easier, from the council’s perspective, to attack me for the impertinence of asking if our money is being spent on slap up dinners for an overpaid former chief executive.

Yes, but I'm thinking about adopting Mike Freer's policy of only allowing messages to be posted by people who think I am wonderful and say nice things about me.