What value is Brian Coleman? 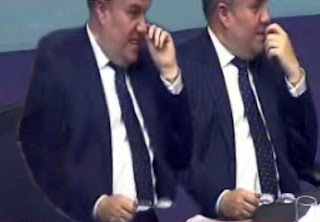 No stranger to controversy, Brian Coleman, has launched an astonishing attack on Mayor of London, Boris Johnson.


In front of television cameras and journalists a packed chamber, Coleman today asked a stunned BoJo to explain the cost of his “envoys, or consular generals and ambassadors.” He wanted to know what “added value” his appointments had brought London.

Many taxpayers have similarly been asking what value Brian Coleman brings to London. Let’s look at the facts.

As a member of the GLA, Coleman receives a basic allowance of £50,582

Add to this his Special Responsibility Allowance as Chairman of the London Fire & Emergency Planning Authority (LFEPA) - £25,612.50

And this is before taking into account his “expenses”.

With Barnet’s council tax set to rise by three times the rate of inflation (as measured by Mike Freer’s preferred Retail Price Index), and thousands of people across the Capital losing their jobs, Londoner’s are indeed entitled to ask precisely what value Coleman brings to London?

I think Coleman has put his foot in it big time

DCMD - This is a marvellous post. I salute you sir!

Incidentally, it would be interesting reveal his true, overall cost by adding on those "expenses" - and even perhaps the value of all the freeloading for which he is (deservedly) so famed.

I imagine that could be a big job mind you.

I don't think there are enough hours in the day to calculate that figure!

If Councils are sacking hundreds of people, why cant they start with this horrid fellow?

That's a job for "we the people" at the ballot box. If people keep voting for Mr Coleman, he will keep drawing these expenses, although David Cameron has indicated that the gravy train will reach the end of the line when the Conservatives next take office.

Hey Anon - Why dont you get to work for the good of your constituents instead using your ridiculously expensive time coming on here to split hairs with DCMD - or shuttling between one free lunch and another or engaging in yet another foolish outburst in - if you are a proper councillor ..

something seems to be missing

Oh hang on, im right and you are wrong

I have removed the comments from Anon (and my replies to him). He had suggested that my original blog was incorrect because I had overstated the amount of allowances Brian Coleman receives from LFEPA.

An annual basic allowance of £7,564.91 is payable to LFEPA’s borough representatives and Mayoral appointees.

However, it is worth noting that Brian Coleman still receives over £100,000 in allowances - almost two grand a week. Ker-ching!

I told you I would correct the blog if I had made a mistake.

But tell me, do you think it will make any difference in the public’s perception of Brian Coleman to know that his allowances this year are only £102,965.50 and not £110,000 as previously stated?

"something seems to be missing

Oh hang on, im right and you are wrong"

Your freeloading and your leeching are morally wrong - plain and simple. We, your unfortunate constituents, are absolutely right to flag it up.

Your hair-splitting and your crowing underline the character flaws that make you so unsuitable for office.

One less deckchair on the titanic?