Brian Coleman was interviewed by Jeremy Vine on Radio 2 last week. He repeated that well known truism: “The only certainty in life is death and taxes.” Unfortunately, in Barnet, the cost of dying is about to get a bit more expensive.

Next week the Cabinet Resources Committee will be discussing a recommendation to increase burial charges by 10% for children under 3 years of age. It is hard to imagine anything more tragic than parents having to bury a child. But for Barnet Council it is simply a money making opportunity.

Barnet proudly boasts that the increase in council tax is lower than the rate of inflation yet interment fees for stillborn children will rise by 7.84% which is considerably higher.

David Cameron has spent three years trying to create an image of caring Conservatism, but nobody in Barnet Town Hall appears to have read the script. 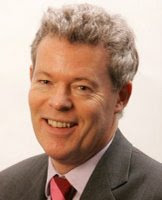 At the same time, the attendee list for the MIPIM property junket in the South of France has been announced and, once again, Acting Chief Executive Brian Reynolds (pictured hard left) will be going. Regular readers of this blog will recall I have previously written about his attendance at this pointless jolly.

Tickets for delegates cost £1,300 each (inc VAT). Then add the cost of flights, the luxury hotel (they don’t do cheap in Cannes), gourmet restaurants etc and suddenly it’s a lot of our money down the drain.

We are in the midst of a long and deep recession. Barnet residents are concerned for their jobs and are tightening their belts. Pensioners are having to dip into their savings to pay their council tax bills because interest rates have collapsed. Yet the public sector arrogantly and contemptuously thinks that it is immune from the realities of the real world.

Mike Freer once claimed that he would be ruthless on cost cutting. Well prove it Mike and tell Reynolds that he can’t go. Tell him that if he seriously wants to be considered for the job of Chief Executive, then he needs to act responsibly in these difficult times and stay in his office and do some real work.

And while you are at it, tell your Cabinet colleagues that if they dare approve the plans to raise burial charges for children, the public will not forgive them.

I've no idea how many children die in Barnet who will be affected by this, but my guess is that for the council the amount extra raised will be a drop in the ocean.

On the other hand for the families, it will be a most unwelcome surprise at an awful time. I wonder how many of the Barnet Cabinet have children and understand this?

That’s pretty shitty. Maybe you should stand for election. Working for the council sounds good; all those nice trips abroad, paid for by bereaved parents.

I agree that the amount of money this will raise is likely to be peanuts - and entirely disproportionate to the distress it will cause grieving parents and the bad publicity it will attract. It seems to me that either the officers are deliberately trying to promote unpopular initiatives to damage the Conservatives, or they are completely out of touch with reality. Either way, the cabinet member responsible should have spotted this before the report was published and taken action. It is not too late for the report to be revised.

Imagine my genuine shock to discover that the so called, self styled Conservative Group have not met and gone through these charges line by line. This was always their job. It is still their job - they have to pass the budget.

They should be spotting this and voting such cruel nonsense out in private before this matters are published.

It's not about doing the job for the current leadership of Barnet. I don't view them as Conservatives as they really don't have any of the policies of a Conservative administration. They are a bunch of useless chancers. The sooner that "normal" Conservatives realise this the better. As we all know I'm a Labour Party supporter, but believe me, what this lot are up to goes beyond the Party divide. I expect a Conservative administration to have certain strengths (fiscal management, business acumen, low taxes, open government, anti censorship, pro small business, Pro green belt, small government). Do I see any evidence of this? Nope, I just see a bunch of incompetents lurching from crisis to crisis and mistake to mistake. Not only that but they cannot stand criticism hence all of the botched attempts to silence their critics.

Tory Councillors are not event attempting to scrutinize the budget headlines. At a recent scrutiny committee that I observed they were busy telling each other how quickly the meeting would be over because there was nothing to discuss. The vast majority of them didn't even ask one question.

Talking of censorship, I read in the paper today that the Parliamentary authorities are trying to stop broadcasters from showing the clip of John McDonnell MP wielding the Mace in yesterday’s debate about Heathrow airport.

Even if you deplore Mr McDonnel’s actions, what he did happened and cannot be undone. Michael Heseltine did the same thing many years ago and it is still talked about today.

When the political establishment tries to re-write history to eliminate incidents which are embarrassing to the Executive, then we are in deep trouble.

I don't want to overegg the pudding in that it has always been the case that Councillors involved in the Adminstration are often quite reticent to criticise (as they see it) 'their Party'.

That has got worse but is not new.

What is new is that the Councillors in the Conservative Group have allowed themselves to be persuaded that they are not allowed to involve themselves in the broader work of the Council / the Cabinet.

Whilst the LGA 2000 does prevent those other than the Cabinet being actually involved in decision making, it does not prevent the non Executive Councillors (who must pass the budget and appoint the Leader every year) from using their political influence.

The patronage of the Leader in handing out money to people, in rather curious distributions and against the London Councils Independent Panels ruling, renders accountability pointless.

If a Councillor doesn't think that he / she is directly responsible for tearing the budget to pieces in their private Group meetings, they should quit.

I would expect a certain amount of loyalty to the administration from Tory Councillors but I would also expect them to use the scrutiny process to at least acquaint themselves with the detail of the budget so that they were able (in private if they thought it necessary) to question things. They are clearly not doing this. Msybe it's happening in private but in my opinion it makes a mockery of the scrutiny process.

I wasn't so much endorsing collusion at Scrutiny but recognising it as having been there from the beginning across the Country.

As regards the influence of Councillors of the ruling Group their greatest clout is always going to be via their Group. This lot don't seem to recognise that.

Having discussed the budget in private and in detail one would hope they would be able to appear less than useless at their meetings!

I have always been a passionate supporter of effective scrutiny. It rarely works as most Councillors in the administration Group(s) want to help and see their policies enacted.

The best I suppose we can hope for is tough scrutiny in public or private where things are really kicked around.