A leaflet put out by the Conservatives as part of the by-election campaign in Brunswick Park is considered by some to be controversial. The leaflet below, reproduced from the Barnet Bugle, attacks the Labour candidate for living outside of the ward, unlike the ‘non-political’ Tory candidate (who works in Conservative Central Office) residing in Chase Way. “What does someone who lives in Hendon know about Brunswick Park Ward,” the leaflet asks? Click on image to enlarge. 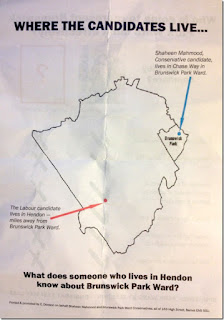 This would appear to be a risky strategy given, as the Bugle subsequently reported, that at the 2010 elections, 13 out of 21 Tory candidates did not live in the wards they wanted to represent. 3 did not even live in the same parliamentary constituency. It would be easy to accuse the Conservatives of hypocrisy. But perhaps this is an unfair criticism. Maybe they have simply learnt from the experience of Sachin Rajput’s recent election disasters?

Sachin Rajput is a Conservative councillor in Oakleigh. He lives in his local ward and has twice been elected to Barnet Council with a very healthy majority. But when he tried to stand in nearby Brent, he was humiliated. Twice.

The Barnet Times printed this letter from Don’t Call Me Dave about Cllr Rajput’s endeavours. Click on image to enlarge.

Unfortunately, the letter was poorly edited by the newspaper. The final paragraph should have read:

Cllr Rajput should take the only honourable course of action available to him and stand down, allowing voters to elect a more worthy representative; someone who is focussed on serving the local community rather than using the council as a stepping stone for personal career advancement.


The public have a very low opinion of politicians. For years, all the major parties have allowed candidates to stand in a ward or constituency even if they have no connection to that area. Was it any wonder, therefore, that turnout for the recent local elections was a measly 38%?  Arguably, the Brunswick Park leaflet was not a catastrophic error of judgment after all. Perhaps Barnet’s Tories belatedly made a strategic decision to ignore conventional wisdom and listen instead to Eric Pickles, Secretary of State for Communities and Local Government, who has repeatedly called upon councils to embrace localism?

UPDATE: Readers who are unconvinced by DCMD’s logic, should consider the fate of Sean Hooker, former LibDem councillor for Mill Hill. Mr Hooker was first elected at a by-election in 2000, having failed to be elected to the GLA earlier that year. But he was also anxious to become an MP and stood unsuccessfully for the Chipping Barnet Parliamentary seat in 2005. At the council elections the following year, he lost his seat. He was soundly beaten into 6th place, even though his LibDem ward colleagues Wayne Casey and Jeremy Davies both held their seats.

By standing for so many different elected bodies in so many different areas, Hooker sent a message to the electorate that he had no desire to represent his local community. Rather, he just wanted to get elected anywhere he could. Eventually, voters decided that they had had enough of being taken for granted and told Hooker to sling his hook. The same fate is likely to befall any candidate who treats the electorate with contempt.