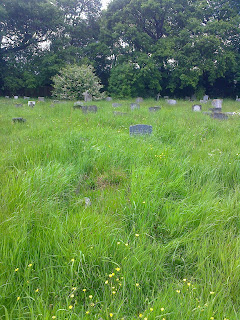 It is a mark of a civilised society that we treat the bodies of our dead respectfully. Barnet Council, to its eternal shame, doesn’t give a shit.

Don’t Call Me Dave has two friends buried at Hendon cemetery. Every year, for the last four years, he has been forced to complain about the overgrown state of the grounds. Every year he receives a nice letter back from council leader Richard Cornelius promising that the matter will be looked into.

On Wednesday, DCMD visited the cemetery for the first time this year. The grass was not merely overgrown, but out of control. In some areas, it reached the top of headstones. In other areas, wild greenery reached over 6 feet in height, making access to some graves impossible.

Not every grave has a headstone. This meant that, despite his best endeavours, DCMD inadvertently walked over several graves because they simply were not visible. Not only is this disrespectful to the deceased, it is distressing to the living.

DCMD spotted some groundsmen cutting the grass at a different part of the cemetery. When he spoke to them, they explained that there were only three of them working in the grounds. That is three people to look after 20 hectares of land. One of the groundsmen said they would try to cut the grass around DCMD’s friend’s grave the following day. DCMD is sure it had nothing to do with the photographs he took as evidence. 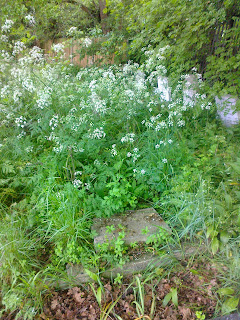 It would, perhaps, be unreasonable to expect the council to cut the grass as frequently as residents cut their own lawns, but it is quite clear from the photographs, that the grass hadn’t been cut all year. It should not be beyond the wit of a competent cemetery manager to operate, say, a 3 week rotation system for grass cutting during the growing season.

People familiar with the cemetery will know that, in many parts, the ground is not level. Indeed, it has quite a steep incline in places. Older people, and those with limited mobility, risk serious injury trying to walk through the grounds with so many hidden obstacles. If the council was prosecuted by  the Health & Safety Executive, it might start taking its responsibility to residents, dead and alive, more seriously, instead of trying to run the cemetery for profit.

DCMD was upset to see this nasty tweet posted by Michael Hanley.

If Mr Hanley had broken the habit of a lifetime and done his homework, he would have seen that DCMD has written many blogposts opposing the mass privatisation of public services in Barnet and others calling for some specific services to be maintained in-house. DCMD raised the issue of unfair cemetery charges with former leader Mike Freer at a council committee meeting long before his friends were buried there. An apology from Mr Hanley would be in order.

Your last few words say it all, in fact: for profit. This is now a Capita run enterprise, and we all must look forward to such delights as faster funerals, floodlit funerals, live streamed funerals, and a new cafe in the Gatehouse.

I have several relatives buried there: where my grandfather lies is semi wild, and overgrown, but peaceful, and I rather like it that way.

I do not like the fact that they have removed the memorials benches that have been left to commemorate loved ones, and when I was there, had stacked them unceremoniously behind a fence.

In fairness to DCMD he has never supported One Barnet or the Freer doctrine. Capiitaism and Freerism is not Toryism and I'm sure sensible Tories are wise giving both a wide berth. DCMD has plenty of things he can justifiably be pulled up on, but this really isn't one of them.