Conservatives should say “Aye” to Independence 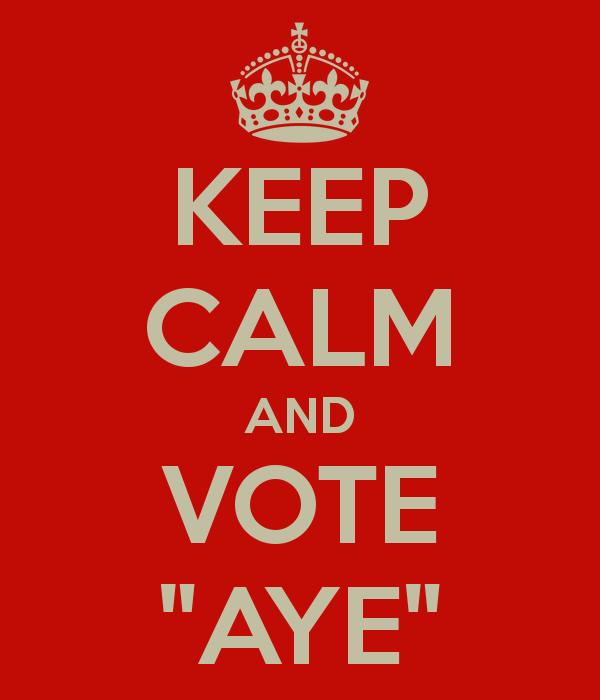 It is fair to say that Westminster is in full panic mode following the publication of a YouGov opinion poll in the Sunday Times showing that the ‘Yes’ camp have overtaken the ‘No’ camp with less than two weeks until the Scottish referendum.  The headline figures report 51% in favour of independence and 49% against.

These figures should be treated with caution because they exclude the ‘don’t knows’. If they are included, the poll shows 47% in favour of independence, and 45% against. It is therefore too close to call, although the polling evidence suggests that the majority of ‘don’t knows’ are rapidly moving into the ‘Yes’ camp.

Traditionally, Tories support the Union, but there are several reasons why real Conservatives should support independence for Scotland:

1. Real Conservatives believe in reducing the power of the state. This means devolving power to a local level where politicians can more readily be held accountable. Real Conservatives oppose the interference of EU bureaucrats in our daily lives, and it is quite understandable why Scots do not wish to be governed by Whitehall.

2. An independent Scotland makes it harder for Labour to win a majority at Westminster. The Scots do not like Tories very much, and it will be easier for the Conservatives  to win a majority in Parliament once Scottish voters are taken out of the equation.

3. An independent Scotland will force David Cameron out of office allowing a real Conservative to take his place. Cameron says that he will not resign if the Scots vote for independence, but the reality is that the decision will not be his to take.  This was an entirely avoidable situation but, as usual, Cameron ignored advice from people who knew better than him. He cannot seriously expect to survive as leader for breaking up the Union.

4. Real Conservatives want to see a British exit from the pernicious influence of EU. If the Scots vote for independence, it will start an unstoppable movement to escape the clutches of Brussels which none of the main parties will be able to ignore.

If Scotland votes ‘Yes’ it is clear that there will be a period of political and economic instability. Nobody really has any idea what the long term effect of independence will be on the rest of the Union, but it will serve to demonstrate how totally inadequate our current political leadership is. There has been an absence of conviction politics for the last 25 years or so. Instead we have been governed by PR spivs who have no concept of how the real world works. The economic consequences of independence might be severe for the average voter, but it might just be worth it to see the current crop of politicians flounder like headless chickens.

Ah yes, back to the days of Margaret:

She famously applauded the financial services industry in the City, for attracting "no subsidies, no hidden subventions".

How did that work out, then?