You may have read the recent story in the Barnet Press of the sterling work by Conservative councillor Terry Burton to have a war memorial commemorating seven council workers killed during the Second World War restored to public display at St James’ Church, East Barnet. The memorial had been found gathering dust in a store room for more than 40 years. Cllr Burton is surely due a commendation for his relentless work on behalf of the war veterans.

At the commemoration service, Mayor John Marshall said: “I’m honoured to be unveiling the plaque in memory of those East Barnet Urban District Council staff who sacrificed their lives to protect the freedoms we enjoy today. Returning the plaque to public display for all to see at the church is a fitting tribute to those who lost their lives serving their country.”

I have previously criticised Cllr Marshall over his idiotic policy to sell off school playing fields, but praise is most certainly due for those sincere and heartfelt words.

You can imagine then, the disappointment to read in the following week’s edition that the council had apparently reneged on a promise to help restore the war memorial at St Peter-le-Poer Church in Muswell Hill. The memorial was badly damaged in a storm three years ago and the cost of repairs is £25,000.

The Reverend Bruce Bridgewood says that he spoke to the council at the time and they offered to pay half the cost if the Church raised the balance - which they duly did. Unfortunately, the council has now refused to contribute towards the cost, saying:- “We are not responsible for the upkeep of the war memorial at St Peter le Poer Church. It would be unfeasible to spend a large amount of money on a memorial which is not our responsibility, but we have offered the church free professional advice from our team of architects and engineers with any repairs they wish to undertake.”

In response, Father Bruce has, understandably, written a strongly worded letter to the paper disputing the council’s version of events. I leave it to you, dear readers, to decide whether to believe a council spokesman or one of God’s representatives here on Earth.

Speaking to Barnet Council Watch, Father Bruce said: “The reason why Barnet helped in the past is because the Memorial was erected from funds raised by public subscription. It is very much a community memorial despite the fact that it stands in the Church grounds.”

Father Bruce pointed out that the council had spent £14,000 on flat screen televisions for chief officers. He could have also mentioned the £1.4 million spent on lap top computers - many of which are now in storage, the £2,000 the Chief Executive and his Deputy spent on lunches last year, the £5,000 the Leader spent travelling business class to America, £1,700 spent by an officer on a junket to the south of France…the list is endless.

Regular readers of this blog will know that I have occasionally criticised council leader Mike Freer, but I do not attach any blame to him for this unfortunate situation. I am genuinely certain that he had no knowledge whatsoever of the promise previously made by the council to the Church. 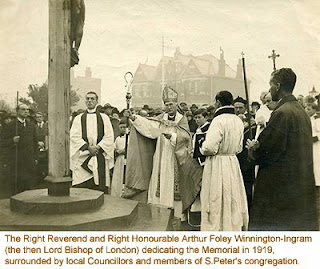 Nor do I believe for one minute that Cllr Freer would take the heartless attitude “The memorial doesn’t belong to the council, so we’re not interested.” I am sure that he will be equally as upset as Fr Bruce and his congregation that the memorial has yet to be restored to its former glory.

So I send this plea to Cllr Freer. Mike, we both know that if it was not for the selfless sacrifice made by those who gave up their lives during the War, you and I would not be here today exercising our right to free speech and expression.

I am the first person to complain when public money is frittered away on pointless projects, but this is not one of them. The council has over £300 million cash invested in banks across the world. The amount the Church requires equates to about 12 hours worth of interest. Surely you can find the money for such a worthwhile cause?

Next year will be the 90th anniversary of the dedication of the memorial. Please take charge of the situation to ensure that John Marshall’s fine words apply to all war memorials in the Borough and that the Church has the funds it needs to restore the memorial in time for the next Remembrance Day service. Do this not just for the sake of those who gave their lives, or for those who paid for the memorial when money was scarce, but for all Barnet residents who continue to live in peace thanks to the selfless sacrifice of those brave men and women. We must never forget them.
Posted by Don't Call Me Dave at 21:05

What an absolute disgrace. Obviously a council that goes back on its word and has little or no respect for the memory of those that gave their lives for all of us, including the council.

I wonder if we took a straw poll amongst Londoners as to what they would rather spends £14,500 of public money on - the war memorial or Brian Coleman's GLA cab bill - what they would choose.

Brian Coleman seems to think that a sacrifice is having to listen to Gordon Brown make a speech as he guzzles his way through the Lord Mayors Banquet.

I'm sure when the brave men who's name went on the memorial made the ultimate sacrifice for democracy and the British way of life, they didn't really have Brian Coleman or his ways in mind.

Not that Coleman really cares.