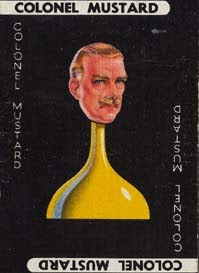 Don’t Call Me Dave has been struggling for 20 minutes to think of a good joke to welcome Barnet’s latest blogger, Mr Mustard, who writes a blog Keeping track of spending at Barnet Council.

DCMD feels sure that Eric Pickles would approve of Mr Mustard.

That’s the best he can think of!

Mrs Angry has already made a condiment based joke on this very subject. She wishes that you boy bloggers would stop nicking the girls' material so shamelessly. She may even have to report you to Mr Pickles himself for failing to abide by the time honoured code of the citizen journalist.

I reckon Mr Mustard works in a shop (he never stops). That's why his latest tweet is:

And that's why he's so aggrieved about Brian Coleman's (another mustard reference) lousy parking policies.

Actually, it's his sister Pam who works in a shop, so scrub that. I'm left leaning on the Brian Coleman mustard reference for a clue to identity.

Well, not identity, as such, more as a clue to how he chose his name. I'd better stop now.

I know who he is and I'm not telling ... interesting, the Coleman link though, hmm ... have you seen, btw, Vicki, Dave Hill is still ignoring the lady bloggers of Barnet?

Mrs Angry has a real sauce complaining about culinary references. Some of us have were blogging about Barnet long before she decided to try and ketchup. She should stop whining, OK?

aha: DCMD, the last man in Barnet to try and attract female attention with a splash of Old Spice behind each ear (or so I hear)...

Mrs A, I try not to be bitter about Dave H. And usually fail.

He picked his 10 best London political bloggers early on - 96.66666666% of them were blokes (he picked one group blog written by two blokes and a woman).

It doesn't seem to have troubled him. (I wonder if they were all white, as well.)

Since then, those are the ones he returns to again and again when he wants to cover, eg, politics in Barnet.

I never expected to be picked, but it is slightly galling to put in a lot of work on a field of enquiry (eg, right to film) and get no recognition... from Dave Hill.

That's what I mean, though, it's important not to get too hung up on it - I'm sure he's a nice bloke but he's only Dave Hill!

If he even knew of my existence, I would expect to be treated as suspect on account of being very left-wing. DH, I think, is more in the Compass camp - pre its recent split!

The group, which was overwhelmingly Labour Party - left of centre, they said, but not very left of centre! - has 'opened up' to other parties.

I haven't looked at the detail, but I'm guessing they mean Lib Dems who are fed up with Clegg's trajectory. I read some of their stuff before and they seem to be pining for the return of liberal England.

Anyway! (Sorry to hijack your blog for this meditation on scarcely interesting internecine left squabbling, DCMD.) DH, being it would appear a pretty straight down the line Compassite, wouldn't like my brand of leftism anyway. If he knew or cared who I was!

Now, why he ignores the winsome Mrs A I don't know.

We must just accept that he picked his faves a long time ago, and he has his job to do, and that's that. We mustn't be too snippy. We must just try harder and build our own fan base. In short, we'll show that Dave Hill, you see if we don't!

Hijack away! I have never met Dave Hill and cannot say why he does not include you in his blogroll. He added Rog and me quite early on. Perhaps he feels that too many Barnet Blogs would spoil the broth? Arguably, of course, the fact that there are so many blogs dealing with our beloved council should make people stand up and ask what the hell is going on. Or maybe every borough has dozens of blogs as well.

Unquestionably, Mrs A writes the most eloquent and witty blog of all of us (now that Statler & Waldorf appear to have gone to that great blogroll in the sky). The only reason I can think for her exclusion is the fact that she writes white text on black, which, whilst not a crime, it should be!

oy, Morris, who you calling feckin' winsome? Actually, I looked at the comments on the article and the lovely Mr Reasonable has been kind enough to mention my blog. Ha, and one of the reporters I notice has joined Mrs Angry's exclusive twitter list. What irritates me about Hill's attitude is that it is typical of the blokish boys club thing you get with too many political blogs. And without dissing you, old timer DCMD, he has been listing you even though you are supposed to be 'retired' - (what happened to all that btw? Fallen off the wagon again due to an excess of Jane Austen?) I'm not suggesting I'm any great shakes, and although I have political motives somewhere at the back of my tiny girly mind, I really do it to amuse myself, but you, Vicki,are a serious campaigner and deserve to be included, and Mr Reasonable too.

ps about the text: I find it easier to read. Also, as you know DCMD I am a technophobe (is that a word?) I did try the other day to introduce red to emphasise my fury over something, and this caused me to lose half the post, don't ask me why. Also my time is stuck on the wrong point and when I try to change it, the posts won't publish. And I can't get images in the middle of posts. Nor can I get that flipping photo off my phone ... I could go on, but I'll stop there.