Rog T is running a quiz on his blog today with a big cash prize, so Don’t Call Me Dave thought he would hold a quiz as well - except without the prize.

Unlike Rog’s quiz, which has 25 questions, this has only one. 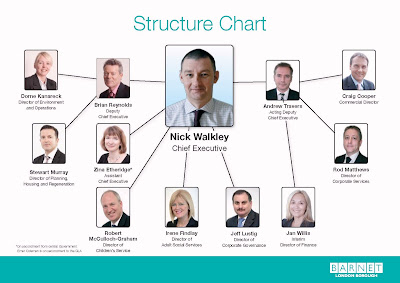 I think the answer to your question is quite obvious.

The Councillors (running costs of over £1,000,000 a year, sharply up since the last Council elections) have little effect on the Council's outcomes.

The £200,000+ a year Cabinet, appointed by the £1,000,000 Councillors, are hugely inexperienced and unknowledgeable in many areas of the Council's work and seem unable / unwilling to lead the London Borough of Barnet.

So there is a secret 'real' Cabinet, made up of 'professional' Officers who refuse to publish their minutes or papers of the real Cabinet (costing well over £1,000,000 a year) in Barnet (aka Director's Group) who are in firm control. The size of this 'Cabinet' has doubled since 2006.

Upwards of £3,000,000 a year is spent funding people to churn around paper, oversee rampant waste, send Barnet down the path of accelerated urbanisation with 10,000s of rabbit hutch flats and coming up with crackpot 'loony' ideas like EasyCouncil.

Barnet needs a strong Cabinet implementing Conservative policies that will roll up its sleeves, get its hands dirty and learn and find out what it needs to in order to turn this Council around.

By cutting Councillors allowances and stripping out the 'political' and 'strategic' officers replacing them with 'doers' not 'procrastinators' a dramatic turnaround with be seen.

Also I noticed that there is a "commercial director". Why does a local authority need a Commercial Director? I thought local authorities were meant to empty bins, run schools and mend roads.

Do they see traffic fines as a commercial activity?