When the Conservatives came to power in 2002, they complained, quite correctly, that the previous Labour/LibDem Administration had plundered the reserves. This was one of the reasons that council tax had to go up by 24% in 2003.

But the Conservatives are also very good at spending cash from reserves: 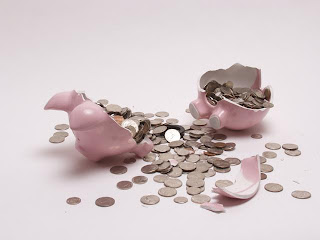 £4 million to pay for the overspend on the Aerodrome Road bridge project.

£250,000 to pay for the feasibility study into the “Future Shape” privatisation project.

On top of this, Mike Freer admitted last week that there was a shortfall of over £1.5 million in interest due on the council’s Icelandic investments.

He also admitted that every 1% fall in interest rates costs the council £780,000 for the current year and £1.8m for 2009/10. Given that base rates have dropped 3% in the last two months with another 1% likely very soon, we are looking at a further loss of income of anywhere between £3m and £7m next year.

The council is facing a serious black hole in its finances. Next year’s budget is due to be debated by the Cabinet in January. It promises to be one of the most important meetings of recent times. Residents are entitled to know whether council tax will rise or if services will be cut. Perhaps the reserves will be raided again, if there is anything left?

What chance does Barnet have of emulating a proper Conservative council like Hammersmith & Fulham who have recently announced a 3% reduction in council tax next year - for the third year running?
Posted by Don't Call Me Dave at 12:36

How do H and F do it, outsourcing, but hang on, everyone is against that in barnet, so the council tax will have to keep on going up and up.

It has been a while since I have had a moment to read, let alone comment on your blog. I do not always agree with you on political issues but I am a follower of Voltairean principles, unlike some of the anonymous numpties who post here, and consider that, not only do you have the right to blog but if people of your ilk were running the Conservatives, locally or nationally, instead of the non-entities that are in charge, the party would be a force for change, and change for the better.

Not everyone is opposed to outsourcing (or privatisation to use the correct term). I have stated many times on various blogs that I support the concept in principle. However, I would not support the wholesale privatisation of every service as there are many (e.g. social services) which, in my opinion, are not suited to the disciplines of the market place.

Also, and most importantly, the council has no mandate for privatisation and until such time that the proposals have been put to the electorate, I would have to oppose them. The real worry is that Mike Freer, in true Tony Blair style, is trying to create his legacy before he leaves the council. You cannot implement such fundamental change to the way the council operates without the support of the public.

Subject to my first reservation above, I will gladly bang the drum for privatisation.

Yuletide felicitations to you too!

The problem isn't privatisation. It's the lack of scrutiny.

What worries me is the reluctance of those promoting the scheme to discuss it,.